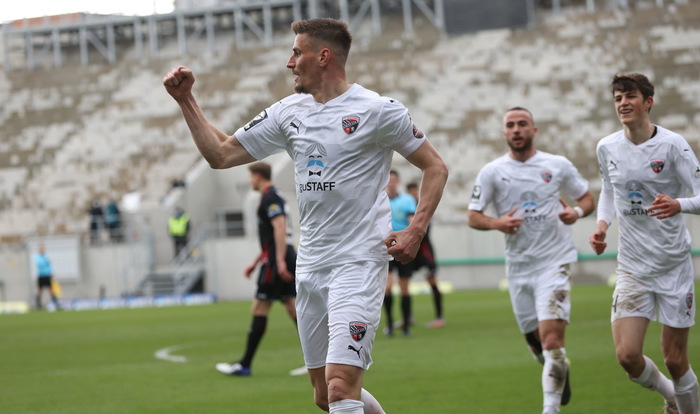 A Stefan Kutschke brace was enough to hand Ingolstadt a 2-1 victory away to Wehen Wiesbaden on Saturday afternoon. In what was a top-of-the-table clash at the Brita-Arena, the Schanzer were able to come from behind after Maurice Malone had given the home side an early lead.

It was the Schanzer who came into Saturday’s game in the better form of the two sides, but it would be Wehen Wiesbaden who would take an early lead. Maurice Malone, already on ten goals for the campaign, added another to his tally, after his left footed shot evaded by Tobias Schröck and Fabijan Buntic. Malone’s accurate strike was the cherry on top of a well-worked Wiesbaden move that had seen Gustaf Nilsson, Gianluca Korte and Paterson Chato all combine.

Nonetheless, it has become characteristic of this Ingolstadt to rise to the challenge in difficult moments and soon after Malone had opened the scoring, the Black-Reds were back on level terms. Michael Heinloth and Stefan Kutschke have formed an almost telepathic link this season, with the right back regularly providing opportunities for the burly forward. Saturday afternoon was no different. Heinloth’s cross found the head of the former Dynamo Dresden forward and from eleven yards out the ball nestled into the right-hand corner of the goal.

The goal was Kutschke eleventh of the season and continued what has been a fantastic vein of form for Ingolstadt’s club captain. In fact, the 32-year-old was unfortunate not to have opened his account shortly before Malone’s opener, having seen an effort from eighteen yards out slam against Tim Boss’ crossbar.

After what had been a whirlwind start to the proceedings, it was inevitable that the furore would begin to fade. Both sides were unable to maintain a firm grip on the football and chances were few and far between. As ever, Marc Stendera’s set-piece deliveries provided the potential for a chance, but the midfielder’s teammates were unable to oblige the theory with an attempt in practice. The home managed to go one better and at least have a shot in anger, although Buntic was this time able to match Korte’s powerful strike.

The first half had largely been an even affair, but on the cusp of halftime Tomas Oral’s men were afforded the chance to take the lead. With neither Sascha Mockenhaupt and Dennis Kempe able to take control of a loose ball, Merlin Röhl took charge of the situation before the Wiesbaden left-back compounded his misery when he fell the young midfielder in the penalty area as if a piece of timber. Referee Florian Exner pointed to the spot and Kutschke did the rest, sending the ball hard and low into the bottom left corner.

Although on the lookout for his hat-trick, Stefan Kutschke was forced to leave the game early into the second half with a knock. With the introduction of Caiuby, the Schanzer were afforded an Injection of pace and it forced Rüdiger Rehm’s men to be more conservative in their defensive shape. Wiesbaden’s right back Moritz Kuhn had seemingly missed this directive and he had hacked down an unmarked Filip Bilbija on the edge of the penalty area, Exner was left with little choice but to send the 29-year-old defender for an early bath.

Despite being down to ten men, Wiesbaden were more than able to hold their own against the Schanzer. Of course, sitting in fourth position before the day’s play, it was not overtly surprising that Rehm’s men were a competent football side. Buntic was able to palm away Nilsson’s effort, before Marc Lais blasted the rebound into the stands from sixteen yards out. Shortly after, Korte produced a menacing delivery from a corner kick but the Schanzer defensive unit led by Schröck and Thomas Keller were a match. 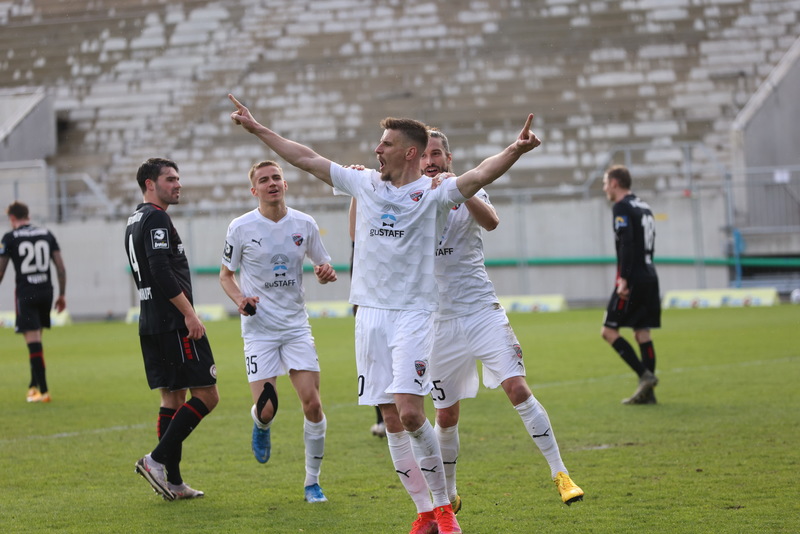 Without Kuhn, there was even more space for the trio of Caiuby, Röhl and substitute Dennis Eckert-Ayensa to attack into. It took last ditch defending to deny the Schanzer a second goal, such as when Mockenhaupt’s headed clearance prevented the ball from reaching Caiuby. However, this a tactic that mixes pinpoint defensive timing with a notable element of good fortune. With this in mind, Wiesbaden were eventually caught out again and this time it was Kempe’s turn to receive his marching orders. Having already received a booking earlier in the second half, the left-back ill-timed his challenge with Stendera and left the referee with no choice but to brandish a second yellow.

Wiesbaden’s tendency to self-implode had handed the three-points to Ingolstadt on a silver platter. Indeed, as the clock wound down it was the visiting side who looked the more likely to add the next goal. To their credit, Rehm’s side did their utmost to prevent this from happening and Boss was able to parry Caiuby’s effort after a neat one-two movement between the Brazilian and Eckert-Ayensa.

Exner eventually signalled for full time and Oral’s charges had done what none of the last nine sides to visit the Brita Arena had managed to achieve; a victory. Of course, Wiesbaden’s self-implosion had played a large part in all three points heading back to Bavaria, but as has become increasingly common in recent weeks, the Schanzer had once again displayed the mettle and grit to take advantage of such a situation. With the gap between Ingolstadt and the chasing pack outside of the promotion places now firmly established at eight points, it could not have come at a better time. 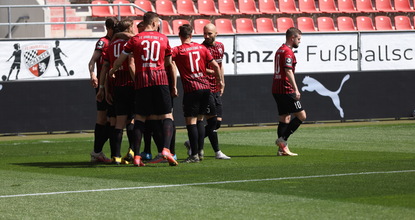